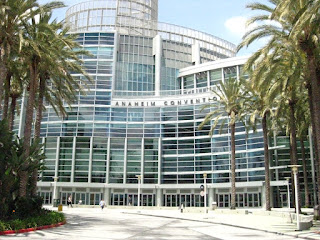 Well, I've not had a chance to blog for a while now because I've been in Anaheim, California. Oh and thats not some picture I found on the internet, as usual, I actually took it this afternoon.
Yes, my life is hard.
I've mentioned in the past that I work for an audio visual rental and staging company from North Carolina and this week, we've had the wonderful opportunity to be doing a show in the Anaheim convention center. The very same convention center that in a few short months Blizzard will be taking over with it's annual BlizCon.
It's been a wonderful stay so far. The hotel is very nice and I've had no issue with them, accept maybe the roach that ended up in my in room coffee machine. The Convention center people have been wonderful to work with, but it is a city facility, so everything is done at a snails pace. Lets not forget it took us 3 hours to get our gear in the room because the local AV company put a boom lift in the freight elevator that was too heavy and shut the elevator down for a few hours. But, other than those small things my stay in California and specifically Anaheim has been great.
I did make it over to Disneyland a few times, but it just wasn't as much fun without the wife, whom I had to leave home back in North Carolina. Still, it was nice to visit the west coast mouse. I picked up a few souvenirs but I am always reminded by co-workers that I can't take the park home with me. I took lots of pictures which I hope to share at some point.
I think it was a good thing for me to disconnect from WoW for a while. I was playing every night after dinner and started getting up early in the morning to do dailies before work. It's just nice not having to worry about what I'll do next in the game.
Don't get me wrong, I'll probably be back at it hard once recover from my jet lag, but for now, its been a very nice vacation from gaming. Course, I do have my DS with me.
Posted by Oakstout at 11:28 PM 5 comments: 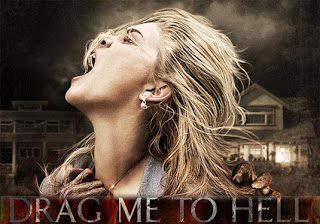 OK, you asked for my wife's review and here it is. First, I want to state, she didn't read my review. She asked me to send her a copy at work, since she can't see the website from her job, and I said "No". I wanted an honest reaction from her and that is what I got. Now, there is definitely a spoiler to the ending in her post, so beware, you have been warned.


(Spoilers to follow......but if you've read anything about the film you probably already know these things....)

When Mr. Oakstout initially asked me to write this review, I wasn't sure how I felt about the movie. You see, although I am an avid fan of the horror genre, I don't like what most horror fans like. I wasn't initially particularly interested in seeing this movie. since I am not a fan of the "Evil Dead" films, and I felt this film would be similar in style. I was swayed, however, when I read multiple glowing reviews of the film. So, I decided I wanted to see it, and of course had to drag my husband along for the ride. (yeah, yeah, I know...)

Reviewing this movie, as it turns out, is a difficult task for me because I liked it....but I didn't like it.

Since I am sure anyone who is at all interested in seeing the film is already familiar with the plot, just let me just give you some random thoughts instead...

All in all, I think the movie is very good, but for me, it was also very nerve-wracking... which, now that I think about it, is to be expected with a good horror flick.
Posted by Oakstout at 2:00 PM 2 comments:

The "Drag Me To Hell" Review 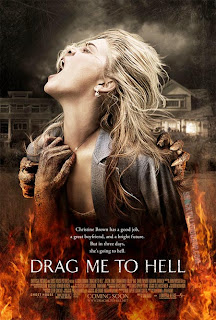 I mentioned the new movie by Sam Raimi in my morning post. A friend and fellow blogger, Thallian, had inquired as to what I really thought about the movie, so instead of commenting in my comment section, I thought, why not just blog about it. So here is my review.

There might be some spoiler information, so I apologize. However, I do not think it spoils the overall movie.

My anniversary was this past Wednesday, so me and Mrs. Oakstout decided to take the day off from our respective jobs and do some stuff together and spend the day reminiscing about our 20 years of wonderful matrimony.

So, after lunch, I suggested that we go see Drag Me To Hell. I'm not a big horror person, but my lovely wife happens to be a fan of the genre. I need to clarify the term fan, when it comes to Mrs. Oakstout and horror movies. She has seen tons of them, whether in the theater, DVD or VHS. If she can't get it on video, then she'll read all there is about it on IMDB. She has an extensive Dario Argento collection and is a fan of Stephen King's work. So, when I say she likes horror stories and movies specifically, I'm not kidding.

I wanted to be a good husband on our anniversary so I suggested we go see the movie. Now, believe it or not, even after listing everything above and her love of horror, my wife is still not a huge fan of Sam Raimi's, but she had read very good reviews about the movie on line and it was something we could do together, so she said yes.

Now that explains why I was there to see the movie in the first place, so what did I really think of it.

Now, I am a fan of Sam Raimi's horror work. I've seen Evil Dead several times and the subsequent sequels that followed. Therefore, I kind of knew what to expect. Lots of dismemberment, gushing blood splatter, and lots of yelling with some slight campiness. I only saw maybe 10minutes of campiness or maybe it was 15. Hard to say, because the gross factor was at warp 20 for this PG-13 movie.

I mean, come on, how many times can viscus liquids of varying kinds come out of a human mouth? There were maggots, flies and talking demonic goats. Gum biting hags that seem to never die. At one point, the movie seemed to calm down from the loud shocking sound effects and grossness and really started to get me interested in the "Horror story" aspect of the movie instead of the over the top gross factor. If I wanted over the top gross in a movie, I'd have spent the afternoon watching Borat wrestle another man naked. Trust me, that is pretty gross.

The over all story was pretty good, aside from the tons of viscus liquids being squirted about. But I will say this about the story, at one point in the movie you just know what's going to happen at the end, you just do. It's so obvious. I won't say bad things about the ending because, well, that was the only bright spot in the movie, not because the movie was over, but because it was a good ending to an otherwise pointless movie.

Oh and there is no Bruce Campbell in this movie either, which was also a bummer for me. He seems to show up in just about all of Raimi's movies, including the Spiderman ones.

I would give it a c- for a horror movie, but then again, I'm not a huge fan of the genre. If you like your movie gross and over the top, then please, go see this movie.
Posted by Oakstout at 2:42 PM 4 comments:

Labels: Drag Me To Hell

Well, I finally did it!

I managed to finally get one of my characters to end game... AGAIN. Technically, this is my third character to reach "End Game". My first was my mage, Gwion and the second was my protection warrior, Oakstout. But that was when End Game was 60, then 70. Now it's 80.

For now, Oakley, my paladin, will be my main level 80 character. I do hope to move my mage and warrior up, but right now, I want to focus on getting gear and other fun toys, like my flying drake. I did spend the 1,ooo gold, yikes, and dual spec-ed my paladin for damage as well as tanking, at least till I can get my warrior to 80.

I would like to thank fellow guild members Wtfrostshock, Silenced and Ax for helping me achieve this goal. They dragged me through the Culling of Strat last night at 12am and promised me a ding and I did. Thanks go to them for the great team effort and support. (tear)

Well, that is about it. I have lots more to say this weekend and some of it is WoW related I think, so stay tuned.

Oh, on a side note, I did manage to see DRAG ME TO HELL. Question, is it possible to unsee a thing?
Posted by Oakstout at 9:40 AM 5 comments: 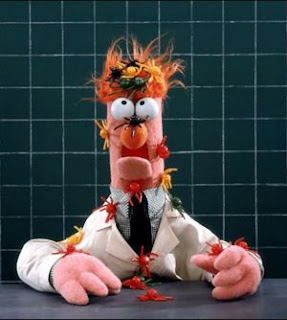 This will be short.

The Star Trek currently in the theaters, and directed by J.J. Abrams is a MOVIE! It is not a representation of life as we know it now, its a possible future and things like, transporters, shuttle craft, warp drives they don't exist except in the imagination. Therefore to say the science concerning something that is, well, not real, might be bad is just crazy.

The purpose of seeing a Science FICTION movie is that it lets one suspend their disbelieve so they can enjoy the unimaginable. The science is neither good nor bad in these movies because it isn't real.

So just shut up, enjoy the fake science and have a good time.