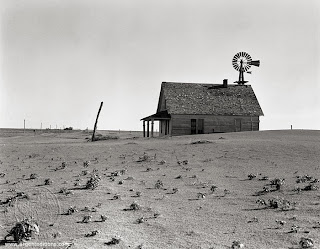 Ok, so that's a picture of a Dust Bowl but you get the analogy right?
Well... it sure has been a long long long long time.
Since I've been participating on Google+ my activity here has pretty much stopped.
Why?
Because Google+ allows me to post quickly if somewhat grammatically error ridden and get feedback almost instantaneously. Course the same can be said of Twitter, except with Twitter, you have to make several posts just to get your point across due to the 140 character limitation and Google + has no such limitations.
Of course that is part of the reason I've not posted. The other part is that real life has gotten in the way of several well devised posts, if only on paper. So there is my attempt for you that don't follow me on Google+ to know what I've been doing in the gaming community.
Well, after coming back from a 3 week business trip, most of that I was sick, I picked up Battlefield 3 and Skyrim. Let me start by saying that I've been off all weekend and I have only devoted maybe 1 hour to Battlefield 3. The rest of my time I've spent in the wonderful world of Skyrim. The reason I've not put in a lot of time with BF3 is something I'll discuss in another blog. See, I'm making a commitment to come back and post again in a relatively short time.
Now a few words about Skyrim.
It's just awesome. Ok, I'll add a few more words to clarify the awesomeness of Skyrim.
The game is very very open world. There is a main story that drives your character through the game, but you can ignore it and do other quests or work on it a little at a time or jump right on it ignoring anything else till you get to the end. There are lots of little side quests that can help you level. You can also just explore the world clearing out bandit hideouts or killing mammoths and other woodland animals. Lets not forget the Dragons you'll encounter from time to time. Killing them will help you unlock certain "dragon born" spells or Shouts that will become very helpful the further you go along in the game. Everything is open.
Designing your character is also open. As you level you get points to add into the "Perk" system. The Perk system lets you craft your character. You can be a stealthy rogue or brandish two hand wielding warrior. It all depends on how you manage your perks. You can enchant items, craft dragon armor or just spend your days massing coin by lock picking and backstabbing your way through the world. And that's just the tip of the ice berg.
All this is packed into a graphically gorgeous engine. I thought Oblivion was great looking, but last year when I finally got around to trying to finish it, the graphics started to look a little dated, not Skyrim. Even on the 360 the game is fantastic looking, course the PC version is even better from what I'm seeing from screenshots on my Google + feed.
If your looking for a game to slake your thirst for RPG games or even if you want a substitute for that tired old MMO you've been paying monthly for I would give Skyrim a shot.
It gets a 10 in my book.
Posted by Oakstout at 6:38 PM 2 comments: