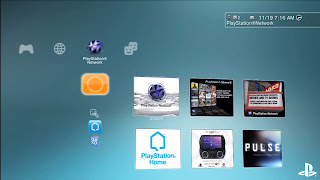 I decided that I haven't been spending enough energy and time with my PS3.  I saved up a lot of money to own this system 2 years ago and for the last year I've been neglecting it, well, other than watching Blu-Rays, but that isn't or rather wasn't, at the time of purchase, the reason I brought it home.

The beginning of my PS3 revival is pretty simple, I decided to start playing Uncharted 1.  I had already played to chapter 6 a year ago, when I purchased it used and I wanted to finally finish it.  So over the course of two days, I was able to accomplish that seemingly small task.  The game was fantastic by the way.  Loved every minute of it and after finishing it immediately started playing Uncharted 2, but that is for another blog post.  So while playing Uncharted, I would post my love for the game on G+ and Twitter.  Several people on those networks, who I trust when it comes to gaming suggestions, suggested that I pick up the Playstation Plus package.  It features a lot of added value like automatic system upgrades, saving games to the SoE cloud system and most recently the ability to download a full game and play for free.  I thought, what a cool idea.  I can pay 50.00 for a year's service and every month I can choose to download a free game to play and since most games they release will be older games but still be in the 30 - 40 dollar range, I thought it would be a great deal and I could come out ahead in the end, plus you get all kinds of discounts on other items as well so its a win win for Team Oakstout.  So today I finally broke down, logged into PSN and started working on becoming a new PSN Plus member.  Course my connection to the store was pretty janky.  Then thing started getting a little strange.  The system had not problem taking my 50.00 for the Plus upgrade, but anytime I tried to search the store to see what items Plus members had access to, I would lose the server connection.  (I'm already feeling the Sony Love through my backside at this moment.)  This happened about 4 or 5 times, so I decided to give the server a little bit of time. Eventually, I decide to venture back into the store to see what FREE goodies I get for being a Plus Member.

After turning my nose up at a few things, not a fan of Virtual fighter, already own Little Big Planet 2 and I already own Warhammer Space Marine on Xbox already. Finally I decided to go with Infamous 2. I start the download.. or at least I think I start the download but I will come to that.  After spending a little more time in the store, trying to decide if I really need those 2 extra courses for Hotshots, I go out of the store to check my download progress and to my surprise I discover that it hasn't started and when I prompt it to start, it says, you don't have any room on your hard drive poor boy, you'll need to delete a few things. Since the PS3 is a bit more like a computer than the Xbox is, it makes finding out certain information harder, eventually I was able to check and see exactly how much space I had on my hard drive. To be honest, ts been a while and I wasn't really even sure how big the drive was to start with, its been a while.  Come to find out I'm sporting around 75gig with only 10 left and the game I want is 15gig.  YIKES!  Good thing I didn't purchase the game.  But now I'm thinking I just spent a lot of cash on a feature, monthly free games, that I can't really take advantage of because my HDD is way to small.

So, I start deleting stuff and finally get about 21gig free, so the download starts, automatically I must add, sure it starts automatically but it couldn't bother to tell me it was hung up or that it hadn't started.  I think sometimes the PS3 is way more complicated than it needs to be, but that is another post as well.  Anyway, having it start automatically is nice, but when its done I'll still only have about 6gig left to do anything with and that won't really help me take advantage of the free game I get every month with Playstation Plus, especially if I want to keep said games on my system.  I am notoriously lazy when it comes to finishing games, if you haven't heard.  Still I want to take advantage of this free game crap and apparently I'm kind of stuck, well, not exactly.

I start looking online to find out how I can change out my wimpy HDD and get a beefy mainly drive.  This apparently is a huge feature that Sony has to allow users the ability to upgrading their systems hard drive.  I look around and discover that in the long run its fairly simple.  Unscrew this, unhook that, pop this out, pop that in and the next thing you know you have a new drive.  Luckily for me the cost of a new drive isn'tt so bad, I can get a 320gig for around 60.00 at Best Buy.  I could go bigger, but I figure that the 320 gig will let me put around 20 or so 15gig games on my system at one time and if that isn't enough space then I'll just have to get an external drive down the road.  The main issue is restoring everything.

A lot of sites say you only have to install the new drive and the system will format and put the system back on, all you have to do is run a utility backup before and a restore after.  Others say you have to have a thumb drive with the new upgrade system software on it and do a bunch of button mashing on your controller, then restore from back up all your games and saves.  Some sites and videos reference the Slim while others show the Fat PS3.  Its all very confusing so I'm planning to plan for everything by backing it all up on a external and then having the system upgrade software ready if need be.

Hopefully by next week, I'll have a nice big drive to download lots of free PSN Plus games.

Course I could be wrong.
Posted by Oakstout at 8:59 PM