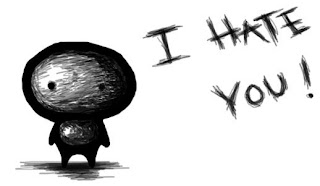 Recently I was playing a game of League of Legends. For the most part its a PvP game with some elements of an RTS game mixed in for fun. It is also free to download and play. There are different styles of play but for now, I'm only going to address the PvP aspect. So, where was I, oh yes, I was playing League of Legends with a friend. We didn't have enough to field a full team for our 5v5 so we did a pick up group. I have played in a few pick up PvP groups and for the most part people are really nice, helpful and not very critical of play style. I've even been in a few losing games and even then, no one throws blame around, which is nice.
Well, things didn't go that way in our little match. Again, new to the game, so I don't know all the special abilities of other characters, so if I misstep is purely by accident. Well apparently, I was doing something wrong and kept helping an opposing player get stronger. Not sure what, but instead of coming to my assistance, one of our members started to become angry and belligerent. Not sure why he felt to help all his pain and anguish on others, but he just wasn't being friendly to the rest of us. After a while it felt like I was back in WoW's Alterac Valley with people complaining about everyone else instead of trying to help fix the problem. My philosophy is "I already know its leaking, I want to know what you plan to do to help stop it".
We continued to play and eventually the complainer kept trying to surrender and we kept checking no. We asked him to assist us with a co op effort to push the opposing team back and when we ALL did that, we actually made head way. Eventually, after after a few tries and the complainer finally helping, we won the match. It was awesome, but even then he had to point a finger at someone, namely me, and complain about how we could have won quicker with out me hindering "his" progress.
That brings me to my topic.
Why do people hate games? I mean, a game is for fun and relaxation. I do it because I want to escape from my troubles at work or to just lose myself from the day to day troubles around me. I don't play a game to get agitated and angry at people. That defeats the purpose. Why do so many people, when they try to escape, end up getting angry and frustrated in a game? My understanding of a game is that its not to be taken serious, but so many people get so involved and so crazy when they play that it makes the game unfun for others. Why do people feel the need to make the life of others playing miserable if they themselves can enjoy it? Are mulitplayer games a good thing for society, when people not only bring their problems to the game world but bring their game world problems to say work or their home life? People have been so angry at players in a game that they have gone to their homes and attacked them or worse.
I just don't understand why people would take such an escapism and make it something that people will eventually dread doing. People will have to play real life to escape gaming. Then where would we be.
Posted by Oakstout at 8:58 PM