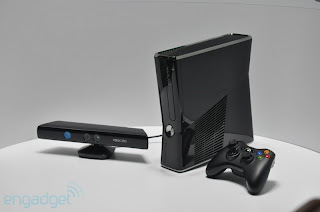 Microsoft announced at the recent Electronic Entertainment Expo their new take on their old Xbox 360 console called the Xbox 360 Slim. It would be smaller in stature and have a sleek black shiny finish. The system would incorporate WiFi, a 250gig hard drive, a whisper quiet mod and be equipped with ample ventilation to prevent any overheating, which was a problem with the old Xbox 360.

But this post isn't about that. It's about my recent conversation with those heathens at the Microsoft Xbox 360 support and how they basically don't get it.

I had been tossing around the idea of picking up one of those new "Slim" units. I was running out of space for saved games and my disc drive would make tons of noise when it was spinning. As it turned out, I wasn't very off the mark because not long after the thought of upgrading hit me, my machine started to take a turn for the worse. In 2009 I had an issue with the machine not reading discs. I had owned the unit for over a year and decided to get it repaired. Well, as it turned out, my warranty ran out about 1 week before I needed it. I had to have my Xbox so out came the credit card. Three weeks and $100.00 plus shipping and I had my repaired unit back in my little hands.

Then in January of this year, I had the exact same issue, the machine wouldn't read a disc in the drive. I knew immediately this was an issue. I did not hesitate to ship the unit back to Microsoft, this time under warranty to get it repaired. It arrived back 3 weeks later with a 3 month extended warranty, which apparently I either forgot about or didn't get notification on because I thought it was another full year since it was the exact same issue which they seemed to have failed at repairing the first time.

Well, as luck would have it, recently after having thoughts of abandoning my old unit started to rise, the disc drive started to fail again. This time only 6 months had passed. So I decided to call up Xbox support and see if they would repair it for free since it had only been a mere 6 months since the its last visit to the doctor. Besides, it was the the exact same issue so they should at least honor their work and try to bring some life back into my old Xbox. Especially since I wanted to trade it in at Gamestop for a new unit... shhh... it might hear me.

Alas, that was not the case. I even did that thing that all men do when they aren't happy about a call that goes against them, I raised my voice and shrilled at the poor lady on the phone about how unfair this was and how I couldn't understand why this same unit would fail in the exact same way 3 times in less than 2 years. I told her to bump this call up the line to someone that could actually help me since all she was doing was cock blocking me from my free repair.

Now, just so you don't think too ill of me I did some thinking while I waited. I'd calmed down a bit and realized the cold hard truth of the situation. No tact I took would actually work on these cold hearted people. If I wanted my Xbox fixed, I'd have to pull out the credit card and make the magic happen that way. Course I did try one last plea with the person next on the corporate ladder of denial. It too didn't work and I was reduced to telling her that their failure to fix my machine properly the last time didn't speak well of their product nor did it speak well of those chained to work benches in the bowels of Microsoft repairing broken Xboxs. Normally I'd just refer to them as untrained monkeys but i thought I'd keep her in the dark about the truth, that's me, Mr sensitive.
I hung up the phone. I didn't pull out the magic make things happen card. I had resigned myself to the fact that investing any additional money into my sweet old machine would be better served buy just getting a new machine.
Since they seem to be in high demand and the supply very limited, I had to plunk down some money to reserve one at Gamestop. Some would say screw Xbox. Don't get a new system. But I've got a ton of Xbox games, lots of friends that I like to play with on Xbox live and I can't quit all that. I have decided that this will be it for me and Microsoft. If they do release a new console system that surpasses the 360 I won't be getting it. I've had a Sony PS3 for over 2 years now and not once have I had an issue with it. I watch lots of Blu Ray movies and play a good number of games without so much as a small hiccup. If Sony can do it, why can't Microsoft? Look at the Wii. It gets abused a ton with controllers getting tossed into TVs and ceiling fans. I haven't heard of it Red Ringing or the disc drive crapping out.

Is it because Microsoft is an American company? Is it true that Americans produce inferior products that fail more often than they succeed? I guess I should ask Steve Jobs that question, huh?
Posted by Oakstout at 8:32 PM No comments: