The Price of Failure 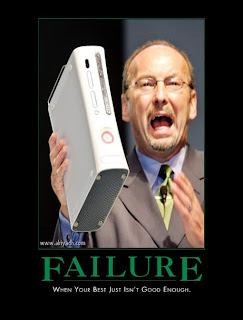 Apparently, the motto at Microsoft's Xbox 360 division is that "Failure is always an option."

Last February, 1 year and 1 month after I purchased my Xbox 360, the dvd drive failed. This failure made it impossible to play any games on disc, which was the bulk of my library. It wouldn't have been a big deal except my warranty had run out, which meant I had to shell out an additional $100.00 to get the system repaired or pony up, at the time, $300.00 for a new system. Since I had yet to purchase a Wii or PS3 I had to get my system repaired.

I paid the cash, sent it off and within 3 weeks, I got my system returned and working perfectly. Along with the repair, I got an extended 1 year warranty on the system, which was something I never thought I would have to use. That is until about 2 weeks ago my system's dvd drive started acting up again. Sometimes it would read a disc and other times not. Now, lucky for me, I've got that extra year so I was able to send it in under the new warranty.

Now, I can't help but wonder if they even know what they are doing when they claim to repair those machines? Are they just recycling used parts to get machines out the door faster? Are they correctly diagnosing problems or just throwing stuff together hoping it will last? I had a tech on the phone tell me it was my hard drive and he almost had me convinced until the disc wouldn't read when the hard drive was disconnected as well as when it was connected. Besides, when it eventually does read the disc it sounds exactly like a helicopter which I'm sure isn't a good thing.

So, I am sans Xbox and my Modern Warfare 2 for a few weeks. Course, unlike last time I have a PS3 and Wii to play when I get bored of WoW. But all this got me wondering about how the gaming industry handles the multitudes of broken products.

I'm sure that the standard of the gaming industry isn't to just throw something out on the market and decided later how or if they plan to fix it, and yet, at times it sure feels that way. I don't know how many times I found out after installing a new game that I just paid $50.00 to be a beta tester. But yet, no one complains. There are no recalls for the gaming industry. You don't get a broken game and take it back to the store for a new one. We are stuck waiting for them to provide a patch that will actually make the game worth the money spent. If they don't your pretty much stuck with your broken purchase with no real recourse. And this is the way they have been doing business for years and no one has called them on it.

I just don't know why people aren't more vocal about it, especially considering the number of blogs and fanboys out there. It just makes no sense.
Posted by Oakstout at 9:41 PM No comments:

I decided to have my wife take the test because, well, if the cat was to kill anyone, it would be her first.

Quote of the Day!

Syp has inspired me to post one of my own.

Never Make a deal with the Devil, because negotiating is Hell! 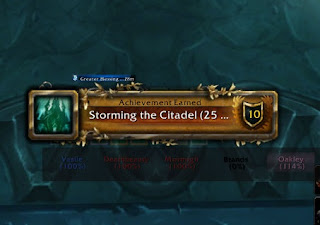 I never did Zul'Gurub, the original Onyxia's Lair, nor Molten Core. I wasn't there at Blackwing Lair, Ruins of Ahn'Qiraj or Temple of Ahn'Qiraj. I never set foot inside Tempest Keep, Mount Hyjal or Black Temple.

Why? Because I wasn't a raider then. I rarely did instances unless with close friends. I soloed content, ganked with buds and did a little Battlegrounds when the mood suit me. To tell the truth, Raiding scared me. I had heard stories of people going crazy because they didn't get loot or mass exodus from guilds because of drama over small stuff. Leaders barking orders and people having to be there on time and not screw up or getting over looked on gear rolls because you weren't in the in crowd. It seemed like too much hassle to even consider being a part of it. That was then.

But now for some reason I got the fever to raid and I've got it bad.

A few months back I joined a raiding guild and although it seemed there would be problems and drama during the recent holiday season, things have turned completely around. For some reason, the guild has been performing spectacularly. As a result, we've managed to one shot all of Ice Crown Citadel in both 10 man and 25 man mode. This did not include the new release this past Tuesday of The Plagueworks, with several new and interesting bosses. 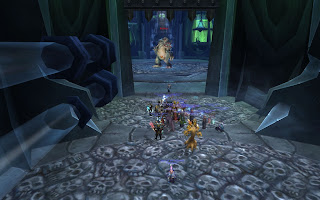 After successfully clearing our 25 man content, we decided to have a try at the new wing of the instance. To start off with, several members died on the "Frogger" part of the entrance. We first came up against Stinky and Precious, which let me tell you, those encounters were like trying to ride a bicycle blindfolded. We only had limited knowledge of the new section, because we didn't expect to be there in one try. We wiped the raid several times before we decided to call it an evening and that was on the named trash mobs. Later in the week, we did the 10 man mode, which as stated above went rather well. So again, we reached the Plagueworks ready to combat the new bosses, however, this time several people had read up on the encounters and had a pretty good idea on how to accomplish our goal. It took us several tries on both Festergut and Rotface, but we successfully, as a guild, took them down.

That was one proud moment, that as a guild we could come together and reach a place in the game that a lot of guilds hadn't even seen nor had they been able to accomplish so much so quickly. I mean the content came out on Tuesday and already by Saturday we had killed off two of the new bosses, that is some kind of accomplishment in my book. The great thing is we are a very casual guild. We schedule raids twice maybe three times a week, but nothing is manditory, people help others get what they need to raid, like food and flasks. No body is yelling at anyone for making a mistake and everyone has a great time. We aren't like the hardcore raiding guilds out there, we just try to have fun and so far, it seems to be working for us.

The point is, guilds don't have to be hardcore to have fun and accomplish major things in the
World of Warcraft. They don't have to be clicky or bossy. There doesn't need to be major drama and if there is, find a way to sort it out and keep people who do a good job together. The trick is to have fun, because its really just a game anyway.
Posted by Oakstout at 5:45 PM 2 comments: