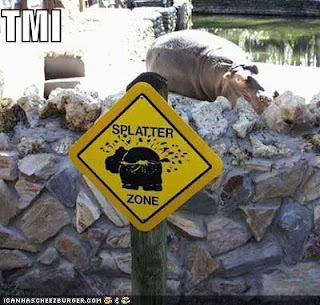 T.M.I or also known as "Too Much Information".

Back in the day, it was presumed that you couldn't have too much information. Knowing all we need to know about something, helped us make informed decisions and helped guide our thought process. But these aren't the old days. Now we are in the age of technology and what use to represent something which was needed is now defined as something we don't want. I regret that today, I'm going to talk about the later.

Now, in today's age, T.M.I means hearing something we don't want to hear, like when Paul tells you he got drunk, ate a bucket of chicken and threw up on his mom's shoes or that your best friend for years decides to tell you he has a plastic blow up woman, called Linda, whom he plans to marry the moment it becomes legal to do so. What it means now is, we really wish you had just kept your mouth shut and not told us that juicy bit of information. Now, I bring this up, because I want to talk about T.M.I in reference to theory crafting and specifically MMO's.

Cuppy, a short time back, explained how she disdained from reading any blogs that divulged a truck load of theroy crafting, she then explains that she isn't against theory posts in general, but she would like to see them from developers and not from people that number crunch the visual and don't know the code, which is how I translated it to mean. Channel Massive decided to take issue with this and talked about it on their Blog O Steria. Sorry, I have to give these guys props, they turn out a very interesting podcast.

Now, I've read theory posts before. I have gone to elitist jerks and maintankadin a few times looking for information about how to tank and how to get my stats up so I can be the best I can be in the game. Sure, a lot of the time, its number crunching by people that are analytical, who know that result A when added to result B will get you result C. Basically, they haven't seen the code, but from what the game is outputting to them visually, they can deduce the answer they need from the question proposed. There is a need for this kind of information because people crave it, they want it and they don't feel they can play the game without it. Sad, but true. Which is why it's a choice. People put up forum boards and blogs to discuss this kind of information. Whether you go there or not, is your choice.

Now, I didn't quite understand Cuppy's feelings on this subject till just recently. I won't name names, cause well, I can't remember who it was and if they read this post, I hope they understand that they did nothing wrong, this is how I felt when it happened.

The other day, I was in Champions Online, hanging out, playing one of my many super heroes. While playing, I decided to hang out in the guild vent channel. A lot of the people in the guild are actual blogger's which is pretty nice. Anyway, I was questing along and listen to them chat. Its fun to just hear people get excited about a new game, and discovering new things. Every now and then, I would interject something to the conversation about how much fun a certain power was or when I killed a cool looking villain. Eventually, the conversation changed and when they started talking about the numbers, meaning what set up netted you the best results and how other results were far less impressive and gimped. They started throwing out information about energy regen and which stat was the best to level up and what skill powers to take , a lot of it was way over my head and the word "viable" kept being tossed around. When they had boiled the numbers down, it left little choices as to what was worth playing in the game and what wasn't and this just started to bum me out.

Here I am, trying to be fully immersed in a game of super heroes enjoying how my character knocks people back 50 yards or how I can fly around and shoot enemies with my shock power, and I'm hearing this new fantastic game being boiled down to a bunch of stats that if you don't have them, your screwed. I mean, it turned me off fast. Instead of getting the feel of playing a super hero I was feeling I had made a terrible mistake and was playing a really gimped game, and this was in a matter of minutes. And all this from a few people discussing theory. It wasn't their fault, but it did take me out of the game and for a while there I wasn't really enjoying it. Because I'm thinking, should I just stop what I'm doing and roll something that will be "Viable" down the road? I mean, the game is set up for the player to have tons of options, but are there really that many options if I want to succeed in this game?

I do want to state that it wasn't anything the guys in the guild said in particular, it was just the fact that when the numbers had gotten crunched, that the final result was some aspects of the game just weren't going to be working well in the game, in their analytical opinion. Your overall ability to do particular instances or mobs might suffer. They didn't' come out and say, Oak, your screwed now. This was their theory. I mean, they figured all this out by running characters up to 20+ and seeing what worked and what didn't. So for the most part they were the ones who got really boned. They had, in their eyes, wasted valuable time playing a character and discovered they wouldn't be able to do much once their. But why can't we be ignorant of this? I mean, if you didn't' know that your character was gimped would that take away from your overall experience? I'm sure they had fun getting the character to 20 and if they hadn't crunched the numbers, would they still be having fun? Isn't there a saying that "ignorance is bliss?"

So, in the end, I just decided I was going to play the game like I wanted and to hell with the theory that my character might suck later on. I'm a super hero damn it and that is the fun I wanted to have. If I wanted to theory craft and number crunch, I would go back to raiding end game in WoW.

But as much as Cuppy wants to get away from it, theory craft isn't going away. People need to boil it down, get the skinny, because those people don't believe in too much information. While others, who just want to play a game, who want to be immersed in the world and find peace from the real one, who want to be a warrior or a super hero for a short period of time, they believe that there is such a thing as too much information and they say, keep it to yourself.

Course to be completely honest, even those people will seek out the numbers, eventually.
Posted by Oakstout at 11:44 AM